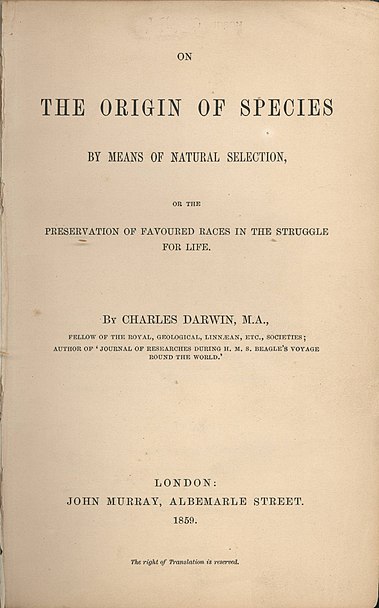 While most of us were preparing for a hearty Thanksgiving dinner last week, a notable anniversary occurred on Tuesday November 24th – the 150th anniversary of the publication of Charles Darwin’s “On the Origin of Species.”  This monumental work first published in 1859 laid the foundation for future scientific investigation for what is now known as evolutionary biology.  At the heart of Darwin’s book is his theory that populations evolve over a course of time through a process he calls “natural selection.”  (Natural selection would later be coined as “Survival of the fittest” by Herbert Spencer, a phrase that Darwin himself thought worthy of his concept.)  Since its publication, On the Origin of Species has endured various additional evolutionary theories throughout the scientific community, especially during the mid-20th century.  However, contemporary science maintains Darwin’s basic theory of natural selection as the basis for the explanation of life.  Within the religious community there was an equally mixed range of responses, a reality that caused Darwin himself to initially express concern.  Some held to a literal reading of Genesis.  Others were concerned how Darwin’s theory could explain the existence of a soul and morality.  Still others began implementing a radical shift in their understanding of the Bible’s intent.  Today, the debate rages on.  Listen to what Pastor Henry G. Brinton of Fairfax Presbyterian Church in Virginia said this past February in the USA Today:

In one sense, Brinton’s quote is helpful.  The Bible is not a science manual and its primary purpose of redemption should be considered when one picks it up to read.  Nevertheless, there are areas of overlap between what the Bible says about “why life exists” and evolutionary theory that preclude the possibility of keeping them in their own organized, separate boxes.  At the heart of today’s main thread of evolutionary thought is the assertion that nothing had to happen.  This creates a problem with the designation of purpose in life.  Again, a compromise was made that today is known as “theistic evolution.”  In essence, this calls for a Creator who used evolution as his “secondary means” of creation.  Not surprisingly, such a response still does not deal with a host of other problems when trying to harmonize evolution with the Bible’s explanation of man.  Crucial elements upon which Christianity is based are at stake, such as being made in the image of God among others.  Thus, biblical authority, at the end of the day, is where the debate ultimately lands.  The “why” cannot be completely separated from the “how.”

Another fascinating consequence of Darwin’s book is the ensuing discussion of morality.  Since the dominant evolutionary theory denies any form of an actual spiritual presence, such as soul, evolutionists are left to posit a couple of explanations as to the existence of a shared set of worldwide moral beliefs.  One possible explanation is that morality is a cognitive function that has evolved with us along with everything else – natural selection afffects our morals as a means of assuring survival.  A recent comment made on PhilipMeade.com asserted this belief, citing that parenting instincts were evolved as a means for survival.  Another, and more prominent theory, is that morals are learned by our society and points to the reality of needing to get along with one another in order to survive.  The striking problem with both of these explanations, and one that haunts a few of my evolutionary friends, is the absence on anything that is right simply because it is right.  Evolution demands that we understand right and wrong based on what is necessary to survive or get along.  The end is what makes the means, not the reverse.

I had a discussion a couple of years ago with two friends about this very topic.  It was so interesting to watch the conversation develop.  One of my friends made the case that slavery was not wrong in and of itself, but that we as a society came to the conclusion that it was wrong.  He was being perfectly consistent with his evolutionary view and allowed himself to follow the logic to its unavoidable conclusion.  My other friend, who shared his evolutionary view, snapped at him rather quickly and asserted that there were, in fact, basic human rights and morality that are right no matter what.  The first friend was a bit perturbed at the second friend’s break in consistency on the issue, but the conversation soon fell apart.  Of course it did!  Who really wants to be the one pleading the case that slavery is not really wrong unless we all agree that it is wrong?  Thus, even those who are on the same page of evolutionary theory wrestle with what I consider to be God’s natural moral law given to all people.

And the debate will continue.  On the Origin of Species has helped shaped the dominant scientific thought on the explanation of life.  Unfortunately, it has also eroded the issue of biblical authority for many.  We at least must be aware of the direct challenges evolution makes against much of the storyline of the Bible.  And there we will “take our stand, we can do no other.”

View all posts by Philip Meade

One of the most helpful documentaries about #Challenger is available for free on YouTube and is called "A Rush to Launch." It tells, in part, the story of Allan McDonald who did everything he could to stop the launch. It is a remarkable story. https://www.youtube.com/watch?v=2FehGJQlOf0